Without mechanical changes to all parts that are part of the steering and axle geometry, no steering wheel and if there are other defects in the electronics such as steering angle sensors, the car will have to be repaired. The increasing equipment of the vehicles with electronic sensors and control devices makes them search for faults, if no mechanical deformations are visible, even more complicated.

Many hobby mechanics move the steering wheel around a few teeth to restore the straight-ahead position, this is a big mistake and means changing the wheel alignment. steering geometry.

Find the cause of the crooked steering wheel

In order to cause of steering wheel malposition the first thing to consider is whether or not in the past extremely potholes or cross grooves have been driven through, where there was a strong impact against the steering wheel during the drive-through.

Are you driving hard against a curbside bumped or when parking 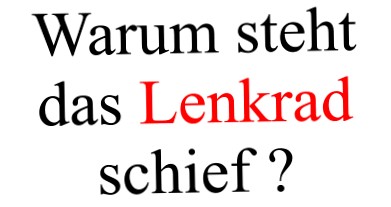 driven against an enclosure ?

Consider if something has banged under the vehicle while you were driving, for example a object under the car have been bumped?

If you have driven too fast over an obstacle in a traffic-calmed zone to the speed limit driven?

In addition to this rage at the obstacles and the resulting ignorance and you drive over the obstacles even faster, because your own emotions are stronger than the perception that your vehicle is damaged.

Take care of your car!

Causes for the tilted position of the steering wheel

Simple causes like the tire pressure, different worn tires, when changing tires different tire sizes mounted with different tread heights, defects on the rims or the tire can be found by simple visual control determine.

If there are no faults to be found the search becomes a bit more complicated open the hood and just look inside is not enough. Systematically, all parts must be steering have to do are examined.

Take your time when troubleshooting! Even the smallest change to the components can lead to misalignment of the steering wheel, even if it is only a very small deformation of the control arm.

The most common causes

Don’t be afraid, not all of the problems occur at the same time !

Have you bent the defective component found it can be replaced, a measurement of the vehicle and an exact adjustment of toe, camber, toe-in, optimization of the steering geometry as well as the calibration of the zero position of the steering wheel requires the visit of a specialized workshop with wheel alignment stand.

If you have found a company that can do a survey dyno has, so it is important to trigger the right job.

If you make a mistake in the confirmation of the order, the repair company can take you to the cleaners endlessly.

the most important thing is the wording of the order, make sure that it is absolutely written that the steering wheel is straight after the repair.

Have they been no compromises the order is straightening the steering wheel.

Do not spare costs

The troubleshooting begins in the order acceptance, a customer service foreman looks for the fault roughly and superficially and will determine that the vehicle must go to the workshop.

Without proper fault detection you should not get involved in any order.

The mechanic is not at fault if the vehicle is still faulty after repair. He only has to work off the order he gets from the customer service master.

However, there is one more aspect to it, that all costs money and as a car owner everyone wants to spend as little as possible on repair, let alone troubleshooting.

So the employee in the repair acceptance very little time for troubleshooting. What can be a problem for the mechanic. Since the customer has a estimate and gets stuck with it, it is hard for the garage to convince the customer that the repair price exceed the estimate.

Further it comes still in addition, which mechanics work after achievement, which given repair times are often very tight and the mechanic literally works in chord.

A constant change of workshop also has a negative effect on the repair, the mechanic should know the car and the owner.

The biggest problem with today’s mechatronics is to take away the diagnostic computer, so they are often helpless. You bring the vehicle to the workshop with the indication the brake is not braking properly, the mechantronics engineer hooks up his diagnostic computer to the vehicle and the fault memory shows no fault, the answer is: nothing is defective.

However, an improper valve on brake booster off, to slow down the vehicle not metered. On this valve is no measuring sensor there this works purely mechanically, for the on-board computer with its fault memory is therefore no fault to be seen.