the teacher gives a visual or audible signal. students react as quickly as possible to these signals and move (with or without the ball) to a predetermined place. For children, these games have a special charm, because they are in a story and take on a small role. training becomes an experience and a lot of fun. 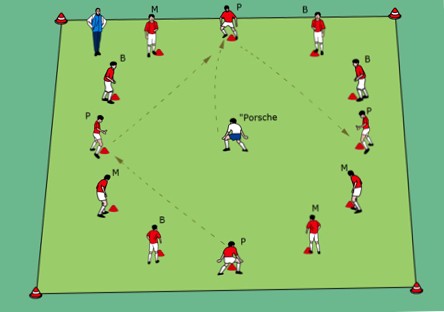 Description:
the trainer/teacher forms a circle of suitable markers (cones, caps, gymnastic hoops, mats, …). these are important, so that the players can drive to a goal (a race box). The trainer alternately assigns each player the name of one of three car brands (e.g., "small games").B. BMW, mercedes, porsche) to.
One player stands in the middle and all the other players spread out on the prepared circle (distance approx. 6 m – 12 m, depending on group size and age of children) around it.

The intermediate player calls out one of the three car brands. All players of this car brand now leave their race box and look for a new one, also the middle player. no "driver" is allowed to return to his race box.
The last player to find a box continues the game by calling out the next make of car. 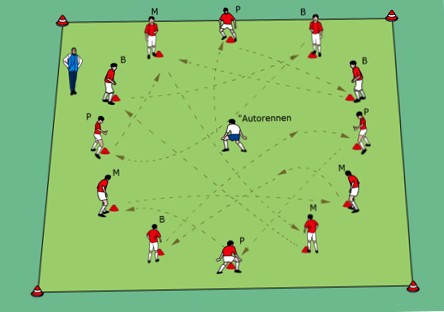 When the player in the middle of the circle calls out: "car racing" all players leave their box at the same time.
Mode of locomotion: running

Car racing is a game for beginners and children from 6 to 12 years old. To get to know it, it should first be run without the ball as a running game. In the second stage, the ball is added, which is carried, bounced or dribbled on the ground. The students learn to cover a distance with the ball quickly, to stop the ball suddenly and to avoid other players.

Fun to try out and vary!

Notes on the small games

What are "small games?

"small games" include any form of movement games with or without equipment and are distinguished from the so-called "big games" by the fact that they are not subject to a defined competition. They leave a lot of room for improvisation and variation in terms of the number of players, the size of the playing field, the playing equipment, the auxiliary materials and the set of rules, which is usually very simple.

Aims of the "little games

The players should be activated to be creative with their own ideas. The games should be varied to suit the abilities of the playing group.

Often no special skills are required.

Despite the competitive nature of the "little games", they do not require official rules and do not provide for an organizational round-robin game. They can be modified or adapted to specific pedagogical intentions and can usually be played after just a few explanations.

By changing the framework conditions (playing time, playing space, number of players, playing equipment), it is possible to specifically promote and train individual motor components such as endurance, strength, coordination or speed.
In addition to the actual function of games as a fun and healthy leisure activity and as a link between passive recreation and sporting activity, they have a particularly useful significance in the practice of other sporting disciplines. They are excellent for developing basic skills and, if skillfully selected, can often replace gymnastics and warm-up exercises in other sports.

Games are often more movement-intensive than other forms of exercise.

The intensities should be coordinated in such a way that safety aspects and accident prevention are given high priority. The older the participants, the greater the risk of injury during fast starts, spurts and abrupt evasive movements.