The new golf drives up. And sets new standards in digitalization on the road. Intelligent assistance systems, such as travel assist, ACC automatic distance control or the occupant protection system, make every journey more comfortable and relaxed. The new golf also features a dynamic design: the deep-drawn front end, the slim LED matrix headlights, the redesigned volkswagen logo and the ambient lighting in the interior give you that typical golf feel.

The new golf has many highlights. Here are three at a glance: 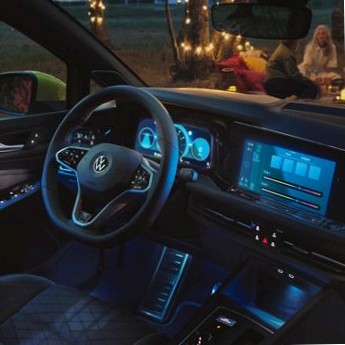 Your golf recognizes you and automatically activates your personal driver profile depending on the equipment – from seat settings to lighting to climate control. You can conveniently adjust your preferred settings in the optional innovision cockpit. 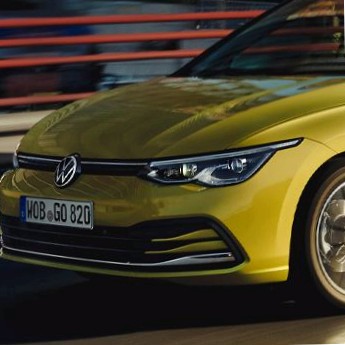 Optionally available: the IQ.LIGHT – LED matrix headlights with "dynamic light assist" dynamic high beam control, which automatically adjusts the light distribution to the road traffic. How not to dazzle other road users. 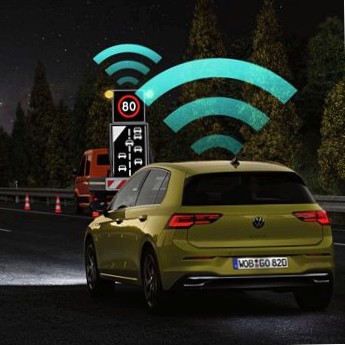 The standard hazard warning system supports the driver with useful information, for example it warns of construction sites or special vehicles. Communication takes place with car2x technology via WLAN (pwlan).

The new golf – connected to the world

Fully connected from the start on demand, a wide range of we connect services are available to you. After activating and logging in once with your volkswagen ID, it is child’s play to use innovative online services free of charge. This gives you access to all important vehicle information, roadside assistance, an online anti-theft alarm system and service scheduling.

Infotainment and entertainment for every moment

convenient use of apps and content with optional app-connect. Music, news, maps or audio books are transmitted to the display of the infotainment system and can thus be operated in your field of vision. On the other hand, there are three interfaces available for connecting to smartphones: apple carplaytm, android autotm from google and mirrorlink®.

The engines of the new golf

A wide range of engines is available for the new golf: TSI, TDI and TGI engines (TGI engine only later) for powerful performance with particularly low fuel consumption. With their combination of small displacement, turbocharging and direct injection, the power units enable smooth power delivery. Plus active cylinder management in some models. Here, the cylinders are automatically switched off as soon as less power is needed. Smooth running remains constant.

Buy or lease the new golf at auto rohr

By viewing the video you agree that your data will be transmitted to youtube and that you accept the privacy statement.

With its plug-in hybrid technology, the new Golf GTE combines a powerful gasoline engine with all the advantages of forward-looking electromobility. Efficiency makes driving twice as much fun.

The VW golf has been in production since 1974 and is one of the classic Volkswagen models. The VW Golf is currently in its eighth generation, with several special models and equipment variants. The compact car has undergone technical and visual changes as a result of the optimized models and is one of the most stable compact cars in terms of value, both as a used car and as a new car, and counts as a solid long-term car. With the new golf, the bestseller sold worldwide has surpassed itself once again.

Facts about the golf

Numerous configuration options ensure a personal golf with high-quality and individual equipment for every type of driver. The interior of the compact car offers comfort and space. The original design language is characterized above all by new technologies and the large infotainment selection. If you prefer a more distinctive and sporty look, we also have the golf R-line for you in the offer, which is noticeable on both the exterior and the interior. The VW golf can be personally optimized thanks to its wide range of options, with extras such as navi or DSG (dual-clutch gearbox) available. The vehicles have low fuel consumption. In all its diversity, the VW golf invites you to a relaxed and safe drive.

One of the most versatile cars

The VW golf proves its outstanding quality in every single model. The exterior design manifests dynamic character lines on the VW golf. The silhouette of the VW golf reflects elegance and modernity. Due to its compact dimensions, the space in the VW golf is used optimally – but the high comfort is not neglected.
The timeless appearance of the VW Golf is distinctive and confident. The effective safety equipment also ensures a pleasant driving experience, which you can also experience at auto rohr.

You can buy, finance or lease the golf as a new or used car from your VW dealer. simply do the test at your auto rohr dealer in passau, grafenau, tittling or vilshofen and arrange a test drive for your golf, golf variant or golf sportsvan now with our contact persons.