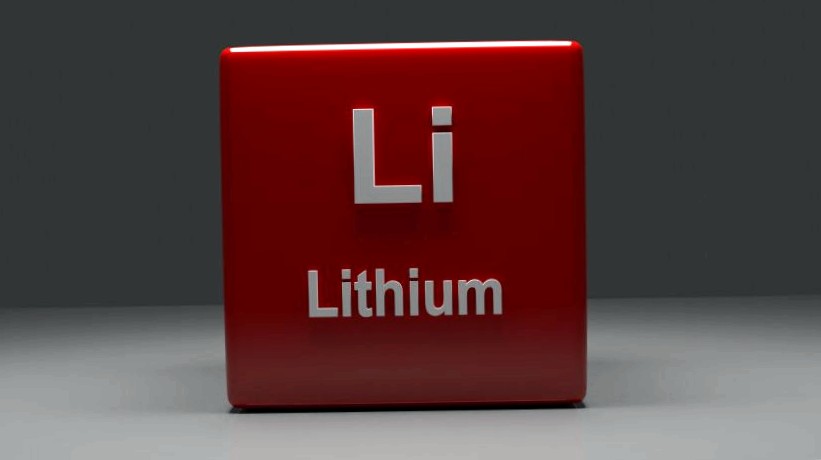 All the major vehicle manufacturers are increasingly focusing on e-mobility. ford and GM alone plan to invest 60 billion dollars by 2025. The German competitors volkswagen, BMW and daimler are planning to earn 185 billion dollars by 2030. The battle in the global electric car market is therefore likely to gain further momentum. This will further boost demand for an essential component of e-vehicles: the battery. The lithium-ion battery is considered to be the heart of every e-car. 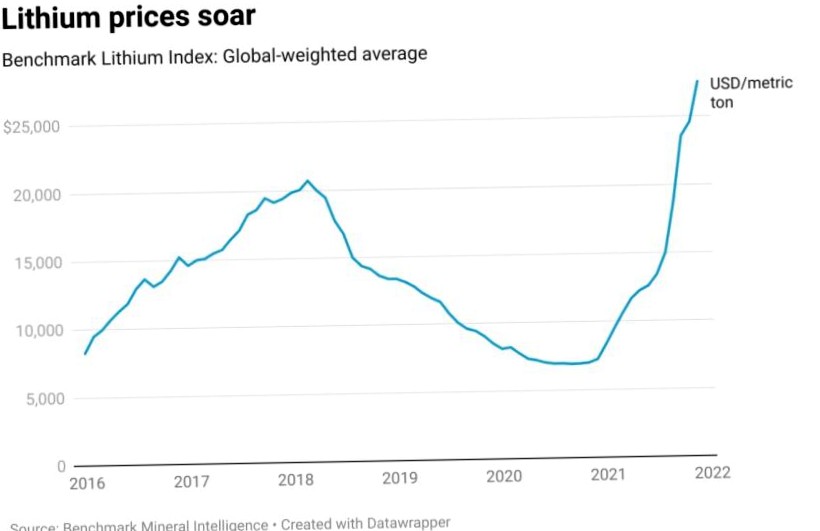 the upward trend in lithium, which is not traded on an open market, is expected to continue in 2022. Because supply cannot keep pace with rising demand. deutsche bank expects annual production to triple to almost 1.5 million tons of lithium carbonate – the most important lithium compound – by 2030. However, demand is expected to increase fivefold to 2.4 million tons in the same period due to the e-car revolution. A large supply gap is opening up here.

Excess demand for lithium as an opportunity

It’s not that lithium producers are doing nothing to keep up with demand. The problem lies elsewhere: the operation of a new mine requires about seven years of lead time. And political headwinds are usually guaranteed due to environmental concerns. Just recently, under pressure from environmental groups, serbia cancelled support for a lithium mine in which mining company rio tinto planned to invest $2.4 billion. Similar problems can be observed with other raw materials such as nickel, cobalt or graphite.

For investors, however, the excess demand for lithium offers opportunities. The US specialty chemicals group albemarle, which produces lithium salts from its own mines, is on the list of potential buyers. Although broadly diversified, the light metal business accounts for 40 percent of sales, which should manifest itself in profit growth in 2022. Over twelve months, analysts see an average upside potential of 28 percent for the share, which has fallen sharply since the beginning of the year.

Albemarle, together with Chile’s sociedad quImica y minera de chile (SQM), controls almost two-thirds of the global lithium business. But unlike albemarle, the shares of the Chilean chemical company are showing no weakness even in the current market turbulence and have gained 6.1 percent since the beginning of the year – but the stock is well below last year’s highs in november. 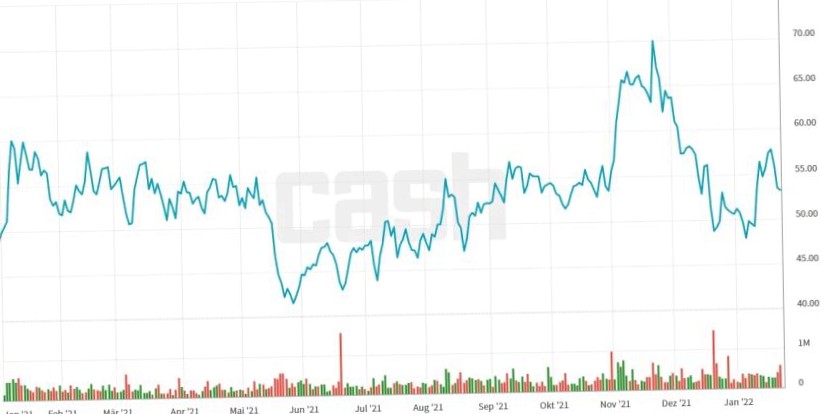 SQM’s main sources of raw materials are both in Chile – in the salar de atacama and the salar del carmen in the atacama desert. The company has a political advantage in Chile, which is rich in lithium, but is also globally involved in lithium production with a large project in Australia. The forward-looking price-earnings ratio (P/E ratio), which takes into account projected earnings over the next twelve months, is an interesting 15.

For both major chemical companies, rising raw material prices are reflected in disproportionately high profit increases. In theory, this is even more true for pure-play, smaller-scale miners such as vulcan energy, lithium americas or piedmont lithium. Whereas these companies do not currently generate revenues and the share valuations are based on future profits from their mining projects. All three stocks have lost considerable ground in the current market environment and are only suitable for risk-averse investors.

Panasonic is a technological leader

Ultimately, however, the e-car revolution also benefits the battery manufacturers, whose products occupy a key position in the production of electric vehicles. The energy storage unit largely determines the price and range of the vehicle. And the demand for batteries is growing relatively faster than the demand for e-cars. Because customers want more and more range and luxury equipment with numerous gadgets: this increases the demand for energy even more. According to the market research institute market research future, the battery market for electric cars will grow by 34 percent annually between 2022 and 2030.

One of the technologically leading battery manufacturers is panasonic. The Japanese conglomerate is a well-known supplier to Tesla and is in pole position thanks to its 4680 battery technology developed specifically for the electric pioneer – a cylindrical battery cell 46 millimeters wide and 80 millimeters high. Morgan stanley expects the new technology to capture about 50 percent of the battery market by 2025.

panasonic’s shares have been trending sideways since the beginning of 2021 and, with a forward-looking P/E ratio of 12, are favorable compared with the industry as a whole. With an investment in panasonic, however, one ultimately participates only to a small extent in the e-car boom because of the broad product range – from print cartridges to professional hair clippers.

The current world market leader is still contemporary amperex technology – better known as CATL – thanks to unrivalled low prices. the chinese group managed to defend its market share despite increasing competition. And the share is also doing well: in the past year alone, CATL rose by around 67 percent, and in the new year it will continue to rise by over 3 percent. Nevertheless, the average target price of analysts surveyed by bloomberg is 24 percent above the current price.

The second largest battery manufacturer, LG chem of South Korea, is launching on 27. january its battery and energy division was listed on the main stock exchange kospi. The majority of the proceeds are to be used to expand production and repay debt. Also on the watch list is the chinese company BYD "build your dreams" -, which manufactures batteries as well as cars.

A definitely bolder and very speculative bet, on the other hand, is the U.S. company quantumscape, whose shares have plummeted since their high in december 2020 – from 132 to just under 16 dollars. The company develops solid-state batteries for electric cars, which are considered the holy grail of battery technology. However, quantumscape has not yet generated any sales and is posting losses. But the money is unlikely to run out any time soon, thanks to financially strong investors such as VW, the kingdom of Qatar and bill gates.

Two ETFs as an alternative

As an alternative to an investment in a battery manufacturer or lithium producer, the "global X lithium& battery tech ETF (exchange traded funds)" to. This ETF gives investors access to a broad-based selection of companies involved in lithium mining, refining and the production of batteries. The costs incurred are 0.75 percent. the share price loss since the beginning of the year is 10 percent.

The amplify advanced battery metals and materials ETF is a valid alternative. This is not only focused on lithium, but covers several battery metals: lithium, cobalt, nickel, manganese and graphite. The ETF charges a total annual cost of 0.59 percent. The ETF has also lost 10 percent since the beginning of the year.