In future luxury class models, BMW plans to offer a huge 31-inch screen with up to 8K resolution as new rear-seat entertainment with the theater screen. The display is stowed in the roof lining and extends in cinema mode when required, accompanied musically by hans zimmer. An amazon fire TV is also integrated.

BMW uses CES 2022 as a showcase for future technologies in the automotive segment. The theater screen is not a study, however, but is to be offered in BMW’s next-generation luxury class. In the new 7 Series, which will also be available in electric form, BMW plans to offer a mobile cinema, even though the carmaker has not yet named the model. The editorial team was able to take a seat in front of the theater screen in munich, and despite the elaborate camouflage, the underlying car was relatively easy to identify as a 7 series.

Only there when the display is needed

The idea is to put an end to the usual screens that are mounted on the backrests of the front seats. “ugly"This was the name given to the previous solution by dr. Tarek zaki, project and partner lead for rear seat entertainment at BMW, in conversation before the trade show. The theater screen, on the other hand, is tucked away in the headliner, so it is not permanently present and only extends when it is actually needed.

When the time has come, BMW virtually celebrates the switch to cinema mode. After activating "my theater mode," the display rotates out of the headliner via two side rails and presents a 31-inch diagonal in front of the rear-seat passengers. At the same time, the sun blinds on the side windows and rear window are closed and the ambient lighting in the rear of the vehicle is dimmed. the appropriate background music is provided by hans zimmer, who is also responsible for the electric driving sounds at BMW. The sound sequence ends exactly at the moment when the screen has taken up its final position. However, the angle of the screen can be adjusted to suit the seating position of the spectators. The corresponding buttons are located at the edge of the screen so that they can be reached easily from both seating positions. 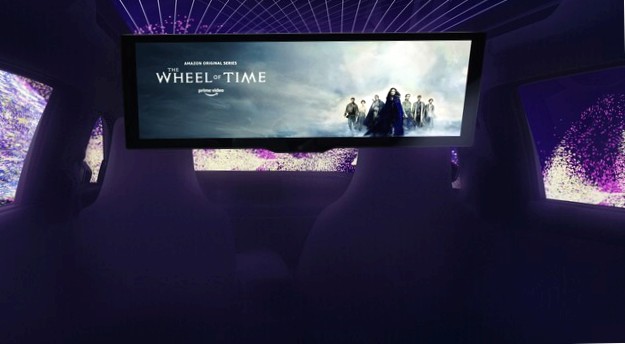 The 31-inch or just under 79-cm diagonals extend in front of the passengers in a particularly wide 32:9 format and are played in up to 8K resolution. BMW talks of around 8.000 × 2.000 pixels, but no details about the panel are provided. OLED or an LCD with mini-LED backlight is not to be expected, however, after black image areas did not look dark enough for this at the first hands-on in munich. Having such a huge screen in front of you in the car was nevertheless impressive.

The many pixels need to be filled with suitable, high-resolution content, preferably content that is also familiar from smartphones, tablets and smart TVs. BMW’s own OS 8, which is used for example in the ix, i4 and the new 2 series active tourer, lacks apps for Disney+, netflix or prime video, however. A fire TV was therefore integrated into the theater screen, so that many of the apps known from this amazon platform can also be used in the car. amazon did not want to comment on whether games, office apps and the silk browser will also be available at the time of the event in munich. The connection to the services is via 5G, which will be used in more and more model series after the ix and i4.

Touch panels in the doors

Operation is either via touch directly on the screen or via two touch panels that BMW has integrated into the rear door panels. in bmw’s future luxury class, there will be a display in the back of each door similar in size to a smartphone. Users can also set the aspect ratio with which the screen is to display the content, i.e. in 16:9, 21:9 or full-width 32:9, which inevitably leads to a cropped image. Movies and series are accompanied in surround, with bowers& wilkins with the "diamond surround sound system" to provide a cinema-like sound experience.

Computerbase has received information about this article from BMW in the context of an event of the manufacturer near munich under NDA. The costs for travel to and from the event were borne by BMW. There was no influence from the manufacturer or obligation to report.