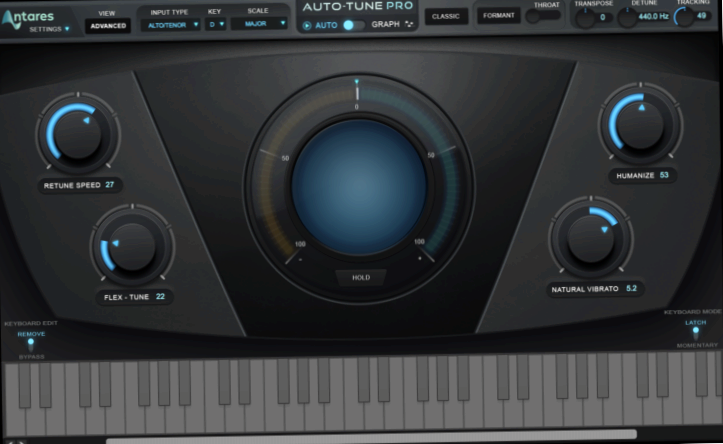 Antares auto-tune pro d the well-known pitch correction program for pop divas (and those who want to become one) has got a new design. Under the name antares auto-tune pro, the buyer gets a fancy new interface and an "old" algorithm. but let’s start from the beginning.

Auto-tune by antares has been the de facto standard for 20 years to correct the pitch variations of singers. When britney spears pushes herself across the stage in a too-tight costume, auto-tune comes into play just as much as in the studio, where many artists also like to use the software as an effect to give their voice a synthetic glitch effect.

While auto-tune is usually used by sound engineers to fix a vocal track that is not quite perfect, auto-tune only became really popular with cher and her song "believe" from 1998. For the first time, pitch correction was used as an effect and many artists, such as T-pain, have made it their trademark. a few smart youtubers even used auto-tune to dub the american news on a regular basis. Their videos regularly made it into the media and are a good example of how even spoken text can be turned into vocal lines.

But even though antares auto-tune pro is considered the de facto standard, it’s not the only plug-in that does so. Melodyne by celemony is certainly the most important competitor here, but also daws like logic pro offer pitch correction plug-ins. In order to maintain its position in this field, antartes has decided to revise its software and introduce it under the new product name auto-tune pro.

Everything the same: basic functions of antares auto-tune pro

Auto-tune has not changed fundamentally in the way it works. There are still two modes: the live mode, where the correction algorithm is automatically applied to an input signal. And once the graph mode, where you can drag the individual notes of the voice to the right position with the mouse. If you already have experience with the software, you will find your way around without any problems, because not much has really changed in terms of operation. however, the user interface now comes in a black surface design that almost looks like that of a digital piano (without judging this now).

the auto-mode now comes in two additional variants: a basic view and an advanced mode. in advanced mode, you have access to MIDI, key and vibrato functions. The aim of the live mode is clearly to reach under the singer’s "vocal chords" during a live performance and to do this as unobtrusively and quickly as possible. apart from a few controls, there’s not much to do here. Set how large the sound variation range should be and how fast the effect should be applied – a too fast reaction time leads to the previously described T-pain sound – and you’re ready to go. In the ideal case you don’t hear anything, because most singers don’t want the audience to hear the digital tricks.

But it’s different with rappers and R&B artists who use the glitch effect as a stylistic device. And for this user group there is the classic mode. Behind this is the algorithm from auto-tune version 5. Antares, in their quest for the most natural sound possible, had advanced their algorithm with the result that these singers could no longer produce their sound live. Stupidly run. Antares has bowed to the pressure and reintegrated this algorithm. So everything is back to the way it was when you click on classic.

The biggest changes in the user interface have been in the graphical mode, although nothing really fundamental has changed here either. After clicking on the "pitch"- or "pitch& time"-button the current track is recorded. Auto-tune pro only works on one copy of the audio track at a time. Afterwards you can see the audio envelope in the editor and the pitch curve as a red line.

On the left side the pitches are displayed as keyboard as orientation. to edit a certain part, the notes can now be drawn in this editor with a tool. Actually, there are three tools: a line tool, a curve tool and the note tool.

With the line tool, straight lines can be drawn, which also allows glissandos to be realized. With the curve tool you are completely free and the note tool creates a box around the audio data. With this box you can move the area slightly up and down (pitch) or left and right (i.e. time).

As I said, this is also the same procedure as in the last version. What has changed is the aesthetics, i.e. the arrangement of the controls and the look as well as the possibility to scale the user interface. in the previous version, the size of the window was limited, which was simply not up to date in a time when many users work with huge screens. as nice as the larger area is, it would have been desirable if the area could also be zoomed via a keyboard command. Or even better: via a gesture on the trackpad. The only option offered by auto-tune is six memory locations for different zoom levels. together with the larger zoom resolution, working with auto-tune has become much better.

In the scope of delivery there is now a small helper program, called auto-key. This automatically detects the key. this information can then be transferred to auto-tune, useful. For sound engineers the support of ARA (audio random access) in the presonus studio one DAW might be more interesting. This saves the recording of the audio track in auto-tune, as this is transferred directly.

Also exciting is the ability to control many of auto-tune’s parameters via MIDI, such as retune speed, throat-length and the vibrato function. The throat-length is an essential factor to change the voice character. Auto-tune simulates different sound spaces here. For those who are now thinking about buying auto-tune, it should be noted that this requires the ilok-dongle. Ilok is a provider of software backup systems and the ilok-dongle, which looks like a usb-drive, has its price: 49,- euro.

Auto-tune is considered the standard in pitch correction, against which all other products have to measure themselves. The interface overhaul is a welcome update that makes working with the plug-in nicer, even if the actual operation has only moderately improved. Here it would have been desirable, if antares had come up with something else. For all owners of auto-tune 7 an update should be out of question, because besides the nicer interface there is also the return of the algorithm from auto-tune 5.