In my car is installed a car radio from delco electronics with the designation CDR 500. The car stereo can play audio cds, but cannot play cds with MP3 files on them. The car radio, as far as I know, does not have the possibility to connect it directly to an MP3 player.

in the future i would like to listen to audio books while driving, which are played on an mp3 player and played on my car radio.

The car radio must then run in CD mode to make the external signal from an mp3 player audible. It is then necessary to have a CD with a track that does not produce noise during playback.

I tried this in june 2013. I dismantled the car radio. I opened the case of the car radio. Then I removed the internal CD-player. Now I could see where the corresponding audio lines of the CD player led to the motherboard of the autoradio.

I took a 3,5 mm jack connection cable with a length of approx. 1m. On the one hand, I cut off the jack plug. I isolated the cable accordingly and soldered the ground and two wires in a suitable way to the places on the main board, which I had identified earlier. The cable I led accordingly from the car radio housing to the outside.

I reassembled the car radio and installed it in the car.

Attention: in this article I will inform you how I connected a cable with a jack to my car radio in such a way that an MP3 player can be connected to it. this is not an instruction on how to connect an mp3 player to a car stereo. My description does not claim to be complete. My description has no general validity; it does not have to be transferable to other cases. My description may contain errors and overlooked dangers! My description does not constitute advice or recommendation. For the execution of such work extensive knowledge in the appropriate areas and a corresponding experience are required. training necessary.

attention: soldering on the main board of the radio is necessary. There is a risk of destroying electronic components or short-circuiting the motherboard. furthermore i can imagine that also the connected mp3-player can be destroyed by a short circuit or something similar.

Attention: if a MP3-player is connected to the new cable and the CD-player is on playback, then there are basically 2 signals in parallel on the board. In practice it seems to work. Whether the devices can tolerate this permanently or whether this can cause damage to the devices, I can not say! 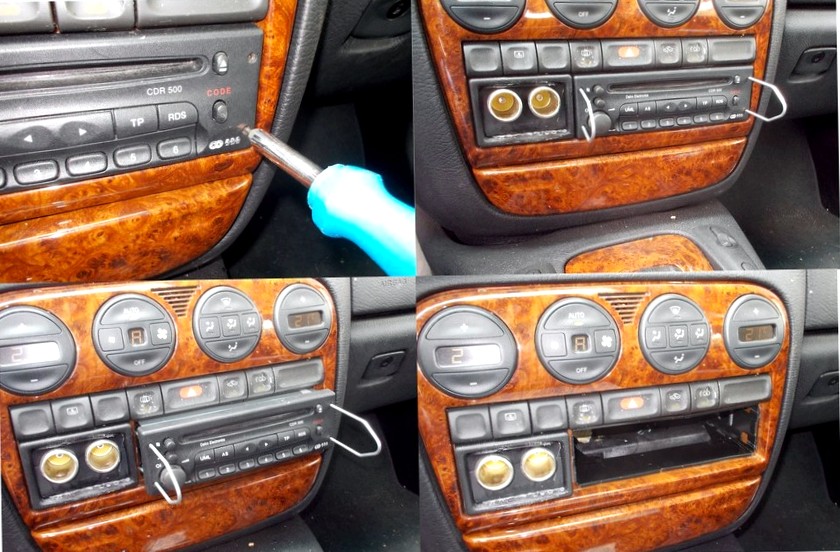 First the negative pole (the ground cable) was disconnected from the battery.
Then I unscrewed the 4 allen screws right and left at the front of the car radio. In each 2 holes on the left and on the right side I put one of the special unlocking brackets. I pushed the release tabs in the appropriate direction to unlock the radio and pulled the radio out of its frame by the release tabs.

I still had a jack connection cable in stock. I cut off the connector on one side with a side cutter. I led the cable from the back of the car radio on a suitable way to the solder side of the main board. I insulated the cable and the single wires accordingly. I twisted the shielding and the ends of the wires accordingly. Then, using a suitable soldering iron and solder, I soldered the wires and the shielding to the corresponding points on the solder side of the main board.

I secured the cable with insulating tape on the motherboard. I made sure that no short circuit could occur during assembly. I put the housing covers back on the housing, closed them and secured them with the appropriate screw again.

Putting the car radio back into the car

I installed the car radio back into the car. When I installed it, I led the newly attached cable to the front on a suitable path. To get the cable out better i removed the ashtray and loosened 2 screws to pull the center console a bit forward.

I locked the car radio into the mounting frame. Then I screwed the 4 allen screws back into their places. I screwed the 2 screws of the center console back inside. Then I mounted the ashtray again.

I then reconnected the negative pole of the battery (the ground cable).
Afterwards I reset the date and time of the on-board computer.

So that the signal of the MP3 player is to be heard, must be played with my autoradio a special burned CD. For this I created a special audio CD. On this audio CD a file was stored, which is suitable for a silent playback.
I created this file with the audio recorder installed on my PC under windows® 7. No sound was played back on the PC. I clicked on "start recording. Then I read the audio recorder ca. Record 15 minutes. Then I clicked on "stop recording". I saved the file as a windows media audio file (*.Wma) in a directory.

The so created file I then burned as audio CD on a suitable CD.

Connecting the cell phone to the car radio

The cell phone I use does not have a jack to which I can directly connect a 3.5 mm jack. It has an integrated MP3 player.

To connect the cable attached to the car radio with the jack plug to the cell phone I use an adapter cable, a mobile music adapter. With this adapter I can connect the 3.5 mm jack to the phone.

Play the CD with silent file on the car radio

I insert the self-burned CD with the silent file into the car radio. I start the CD playback.

Starting the playback of an MP3 file on the cell phone

Now I start the playback of a MP3 file on my cell phone. I increased the volume on the phone and also on the car radio. The file was played back flawlessly via the car radio. The maximum adjustable volume is not so high. However, it is sufficient from my point of view.