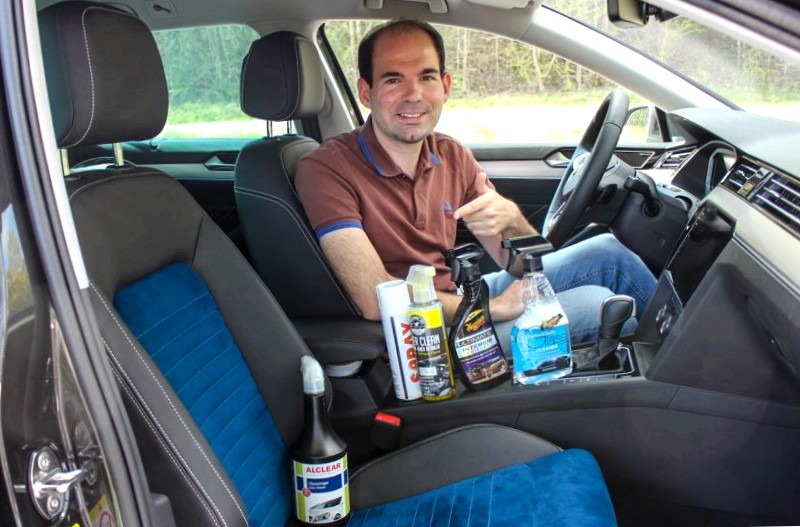 In the last years we have tested several car interior cleaners! Here we summarize our favorites – from cheap to expensive. We also have a tip for optimal cleaning of sensitive displays like digital tachometers.

the chemical guys inner clean cleaning spray is our favorite not only because of its good smell ;). It cleans gently but effectively: fingerprints, coffee stains or grease stains from lost French fries can be wiped away with just one wipe. On the other hand, it is so gentle that it does not attack even sensitive surfaces. It leaves no greasy streaks and also cleans touch screens without leaving streaks. According to the manufacturer it should (probably with silicones) also refresh the colors of the plastic parts. We have not yet been able to test this on new cars. The innerclean spray bottle from chemical guys is available for around 16 €. unfortunately chemical guys is not available on amazon at the moment, but z.B. Here at autoglanzwelt via ebay. Tip: the cleaner always on a microfiber cloth, never spray directly on the cockpit! 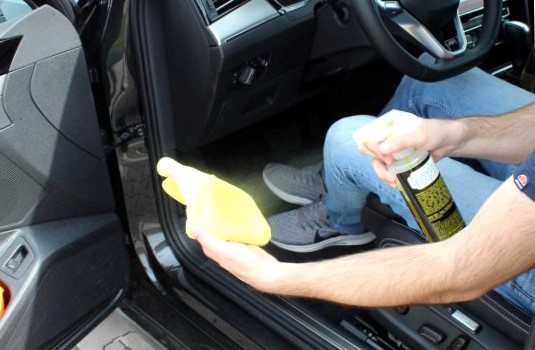 tip: never spray directly on the cockpit, but on the microfiber cloth!

In our video below we show that the interior cleaner from meguiars sometimes leaves significant streaks behind. This is because we are showing an "old" version from 2015, which probably contains even more silicone/oils. We link here but the current version of meguiars quik detailer, which is on amazon for just under 10 € to have. According to reviews and manufacturer description, it is now "non-greasy" and should therefore no longer leave streaks. Also it is a top alternative to the chemical guys cleaner.

In principle, you can clean displays very cheaply with glass cleaners such as sidolin and a kitchen towel. If you have scratches in a digital speedometer or other displays, you will never get them out again and they are very annoying in sunlight. We are therefore fans of the spectral foam (ca. 25€), which was specially developed in germany for cleaning displays and TV screens. you should always spray it on the white glass cloth provided and then spread the foam on the display with gentle pressure until it disappears. The spray cleans absolutely streak-free. since the foam "lifts" the dirt, so to speak, you also avoid scratches. Unfortunately, the spray is expensive at 25€, but it is sufficient for several cleanings and we also like to use it for our notebooks and TVs. 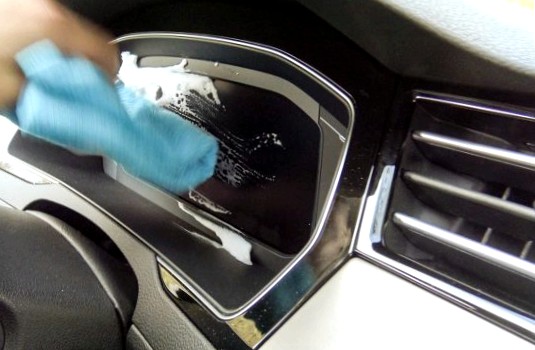 Spectral display foam: application on the active info display in the passat.

while for surfaces, the cockpit and displays the chemical guys are our favorites, for fabrics it’s clearly the meguiars carpet& interior cleaner. We bought a bottle a few years ago that is still at least half full today. Most of the time we used it to remove grease residues, coffee stains or ketchup stains and more. You spray the cleaner directly on the floor mats or. The seats. It smells strong, removes dirt and odors incredibly well. You leave it on approx. 30 seconds soak and then wipe it off. With a clean, wet (only water) microfiber cloth should be wiped again. The place then necessarily let dry well. Afterwards, every stubborn stain should be gone, and the chemical smell will disappear quickly. We have not experienced any faded areas on any car so far. For the meguiars carpet and upholstery cleaner you can buy for approx. 12€. A hammer price, if one considers, how long a bottle lasts.

Window cleaner inside& outside: alclear or meguiars?

For cleaning the windows from the inside you can use sidolin from the supermarket or premium products like alclear or meguiars without any problems. To clean the inside of the windows, there is also a separate article here. On the outside, however, the cleaning performance is more important: in summer, burnt-in insect residues need to be removed. Here meguiars and alclear work well, whereby the alclear cleans rather in the chemically gentler way and not so powerfully. With the meguiars glass cleaner (ca. 15€), but even stubborn insect remains can be removed well.