Jaguar F-pace and I-pace tested – is the I-pace the better F-pace??

The Jaguar range includes the I-pace EV400 and the F-pace P400, two fine SUVs with – of course – 400 hp. so it’s time to answer the question who offers more space, more power and more driving fun with the best possible efficiency in a direct comparison.

parking lot skilift halde on the L 1236, swabian alb. Comparison drive, vehicle change. The colleague gets out of the grim gray F-pace R-dynamic SE with a broad grin and shakes his head. "no chance – this one is good, steers precisely and is fast, but i can’t keep up with it. It’s like I’m on a staggering bus and you’re on an ICE train." he is right. It’s sensational to see how the I-pace sits so comfortably on the road, how it stoically negotiates bends with a minimum of sideways lean, and how it can reach speeds that were previously almost unheard of here, despite all the legalities.

The ingredients? 13 centimeters lower center of gravity than in the F-pace, sensitive steering, air suspension, 22-inch wheels. The fact that the E-jag, with an empty weight of 2.23 tons, weighs 150 kilos more, is irrelevant. Not even in the rain and at low temperatures, by the way. Of course, he sometimes understeers or oversteers, but he quickly understands what’s going on, pulls, pushes or brakes his way out of any predicament. but ESP should always be active.

Only during brisk braking maneuvers does it become clear how heavy the 4.68-meter SUV is and that braking systems in e-cars definitely take some getting used to. its brakes respond too tamely, and if you really want to go briskly from curve to curve, you have to step on the pedal a lot. The measured values themselves (35.6 meters from 100 km/h) are okay, and in some cases even better than those of the F-Pace, which despite its impressive braking system (380 millimeter discs at the front, 325 millimeters at the rear) decelerates less vehemently. Why you still trust it more? Because it can be dosed more finely and to the point.

The comparison of the two powertrains, which nominally have the same power output, is equally exciting. The I-pace is powered by two permanently excited synchronous engines, each rated at 147 kW – integrated low down and in a space-saving manner in the front and rear axles. The drive shafts run through the engines, their torque is 348 newton meters – per engine, of course.

Promising figures, but the F-pace holds up well. Its new in-line six-cylinder engine is a technical masterpiece: three liters of displacement, electrically driven compressor, twin-scroll supercharger, 550 nm of torque and, thanks to the belt starter generator, mildly hybridized as well. Thanks to its high traction, the rear-heavy all-wheel-drive vehicle gets off to a stormy start and impresses with its even and powerful power delivery. Not to mention the smooth running and excellent sound – regardless of the driving mode or engine speed. 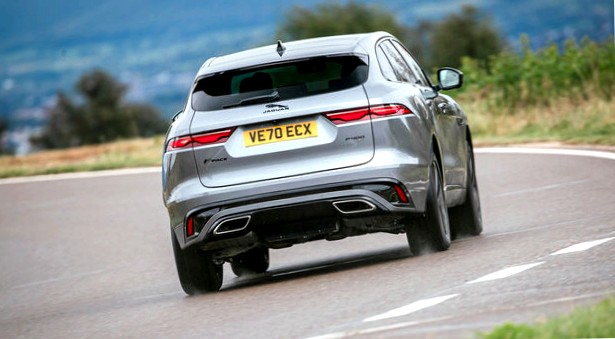 But the big burner only gathers its 400 hp at 5 dB(A).500 km/h, whereas the same power and 696 newton meters of torque are already available at the start of the I-pace and it sprints away correspondingly faster. However, a look at the measured values shows that the P400 engine concept is well worth it: up to speeds of 30 and 60 km/h, the F-pace is only 0.1 and 0.3 seconds behind the I-pace. But then the first gear changes are made, and the e-jaguar purrs away. 100 km/h is reached after 4.9 seconds, 160 after 11.2 seconds (F-pace: 5.8 and 12.6 s). The only thing it can’t match is the 250 km/h of the gasoline-powered SUV, although 200 km/h is certainly high for an electric car.

Noticeable: the ZF automatic transmission in the F-pace is very rough when driving more rigidly. It appreciates downshifts from high speeds all the more. The I-pace only has one recuperation level (0.4 g braking force), which can only be activated in a cumbersome manner via the touchscreen rather than the steering wheel paddle.

Also less grandiose: power consumption, range and charging times. Test consumption is 32.2 kwh, net capacity 85 kwh. So after just 300 kilometers of driving, the I-pace is already on the power cord at. eleven kW of charging power must suffice via onboard charger. The jaguar, which is manufactured by magna steyr in graz, can be charged at a fast charging station with up to 100 kW. Not much for an SUV with 432 pouch cells in the underbody. 35 minutes should be allowed for a 20-80 percent fill-up under good conditions. 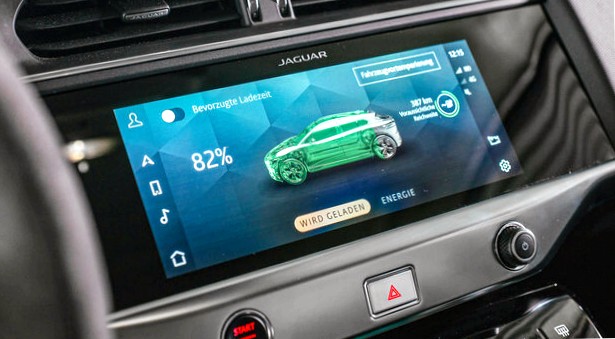 The six-cylinder engine in the F-pace consumes an average of eleven liters and impresses with a test consumption of just 8.5 l/100 km on the 275-kilometer eco lap – not bad figures for an all-wheel-drive SUV with this kind of power. Because the fuel tank has a capacity of 83 liters, the range is close to 1.000 kilometers not far away with a relaxed driving style. And of course the F-pace is quickly ready to drive again. We set a standard time of eight minutes. Accordingly, it scores points here.

The P400’s carbon dioxide emissions, on the other hand, look lousy: 256 grams to 129 grams. Or in hard points: five for the F-pace, 37 for jaguar’s first e-car – a massive lead. Whereby we note here that we do not take into account the effort for battery production and durability. Jaguar grants a warranty of eight years or 160.000 kilometers to a battery performance of 70 percent. as recently as april, jaguar land rover invested $20 million in battery resourcers, a start-up company that recycles old batteries.

The two jaguars are surprisingly similar in terms of suspension comfort. The SUVs handle even rough uneven surfaces smoothly, with limited body movement. The I-pace also rolls even more smoothly at low speeds than its long-legged counterpart. However, the comfort plus in the e-car costs extra again, because the minimum 77.300 euro test car has the optional air suspension with additional adaptive control on board (2.938 euro). Then there are the massive 22-inch rollers (255/40 R 22), for which jaguar charges a totally immodest 5.500 euros charged. With the F-pace R-dynamic SE for 80.450 euros, the adaptive dampers and the big wheels are included in the price, but there’s no air suspension. Accordingly, the SUVs are priced close to each other.

Now let’s check out the inner workings of the two. The differences in material quality and space for the passengers are minimal and partly due to the different configurations. The I-pace comes with cozy sport seats, while the driver and passenger of the F-pace are accommodated in performance seats that offer good side support, but are not as comfortable. Here as well as there, they are subject to an additional charge, whereby the furniture in the I-pace, which is upholstered with vegan materials, is around 2.is calculated 000 euro more expensive. 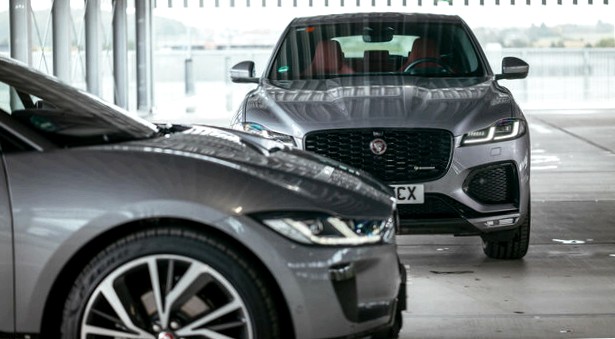 Although both jaguars belong to upscale SUV society, they are surprisingly utilitarian. Two-piece backrests, cargo rails and luggage safety nets are no longer a matter of course in this segment. The F-pace even has space under the load floor for its luggage cover and could tow trailers weighing up to 2.4 tons. More luggage (with the backrests up) can be carried by the I-pace. And don’t forget the 27-liter storage space in the front as the perfect place to stow your charging cables. The cookie is located in the front left.

The I-pace is more economical

That still leaves the cost check, but there’s not much to clarify there. As mentioned, the I-pace is basically more expensive than the better-equipped F-pace, but the government subsidy (7.975 euros) more than compensates for the extra price. If you then take the energy costs alone – fictitiously calculated to 100.000 kilometers (fuel: 1.66 euros, electricity: 0.31 euros), the I-pace costs around 6 euros per kilometer over this distance.000 euro cheaper. And that’s how it secures the victory for itself.