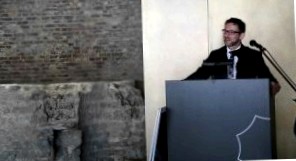 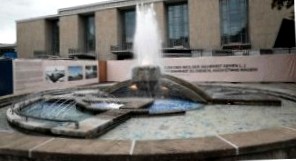 The fountain in front of the Cologne Opera House © Oliver Berg

The city centers are becoming increasingly unattractive, finds Cologne’s cathedral architect Peter Fussenich. Objects such as fountains, sculptures and monuments are falling into disrepair for economic reasons. This must change, demands art historian.

Cologne Cathedral architect Peter Fussenich appeals for more appreciation of art in cities. "If we in our society do not treat public space with care, the consequence will be that the architecture and the art that are in it will be treated with just as little care," he said in Cologne at the "Ash Wednesday of Artists" of the Archdiocese of Cologne.

The fact that objects such as fountains, sculptures, monuments or installations all too often fall into disrepair also has economic reasons, says Fussenich. Newly emerging shopping centers and shopping malls in the vicinity of cities and industrial parks endangered the attraction of city centers and thus also the objects displayed there.

"Have you ever come across great art in a shopping mall??", asked the art historian. The bleeding of the retail sector is often associated with vacancies, neglect and, at worst, vandalism, he said. As a result, the public space as a place of encounter is also being lost, the cathedral’s master builder pointed out. This development also affects the churches as "oases of public space" that offer the possibility of encountering oneself and God, but also with architecture and art as mediators of this encounter.

Cologne’s Cardinal Rainer Maria Woelki explained that cities are places of exchange and discourse, where questions of existential importance to human coexistence can be discussed. Woelki expressed concern that the function of public space is shifting to the digital world. This causes a desolation of the cities, because the discussion shifts to the net.

In Cologne, according to Fussenich, there are around 1.600 works of art in public spaces. Most of them were created since the 19. Century until about 1990. He referred, for example, to the "Stolpersteine" project by artist Gunter Demnig, which began in 1992 with the first laying in front of Cologne’s Historic City Hall. The memorial plaques commemorate people who were persecuted, murdered, deported, expelled or driven to suicide during the Nazi era.

With now far more than 56.000 stones in 20 countries, it is the largest decentralized memorial in the world, the cathedral master builder emphasized. "I have already observed some wonderfully committed people in Cologne who, every year on 27. January, Holocaust Remembrance Day, clean, polish and make legible again the Stumbling Stones in front of their homes," said Fussenich.